Maitena Vega and Maria Molina, students of our Bachelor's Degree in Fashion Design, will be at the grand finale of the contest organized by the International Lab of Mittelmoda. The city of Milan will host on September 16th this event, in which the 25 finalist proposals of the 26th edition of the competition can be seen. 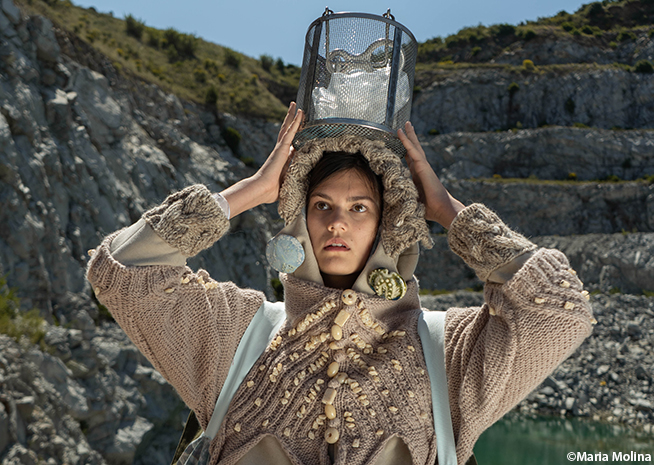 One of the looks from Maria Molina's collection

An international jury composed of experts and professionals from the textile sector was responsible for selecting the best proposals from among the more than 400 entries received from all over the world. Matteo Marzotto, president of Mittelmoda, highlighted the high level of originality and innovation of the works presented.

Maitena and Maria participate in the contest with different looks from their respective end-of-study collections, which they have already shown in our "Memories of the Future" fashion shows. Both projects are part of the B·SEArcular initiative and they have been made with materials obtained from recycling marine plastic waste. Good luck!

At the beginning of the COVID-19 crisis she lost her job and, far from giving up, she decided to give her brand a boost.

The contest returns this 2020 to continue rewarding the audiovisual talent of experienced and emerging professionals.

Professor Nina Pawlowsky, who is one of the organizers, explains us how it will be.

The LCI Barcelona design community takes advantage of its talent to transform confinement into a creative opportunity.

This site uses cookies to offer you the best and most relevant experience. By continuing to use our site, you accept our use of cookies in accordance with our  Privacy policy. I agree
LCI Barcelona
Balmes street, 209
Admission request
Phone: +34 93 237 27 40
Contact us
LCI Barcelona
Balmes street, 209
Phone: +34 93 237 27 40
Admission request
Contact us
About Us
Schools
Resources
Future Students
©2020 LCI Education Confidentiality Policy