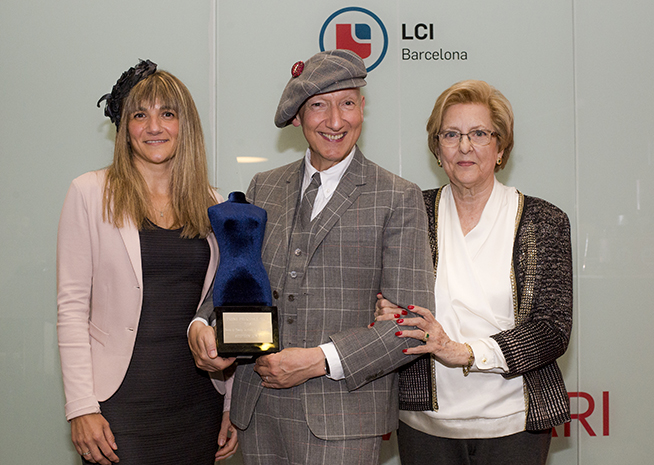 The celebration of the 90th anniversary of Felicidad Duce, the Fashion School of LCI Barcelona, ended with an institutional event in which a new edition of the Felicidad Duce Award was delivered. The winner on this occasion was the prestigious British milliner Stephen Jones, considered one of the most important hat and headdress creators of the late 20th and early 21st centuries. Celebrities such as Diana, Princess of Wales, Madonna, Björk, Lady Gaga or Rihanna have worn his creations, and designers such as Vivienne Westwood, Jean-Paul Gaultier, John Galliano or Karl Lagerfeld have collaborated with him. For our guest, wearing a hat "gives you the chance to play at being a totally different person [...] It's something intriguing that makes your imagination fly and allows you to travel to other times and countries".

The General Director of LCI Barcelona, Mrs. Sílvia Viudas, and the Honorary President of Felicidad Duce and daughter of the founder, Mrs. Mercedes Freixas, were in charge of handling the award. In his speech, Jones was very grateful and highlighted the educational quality of our School, which he could see by visiting our classrooms. He only regretted that the award (a miniature mannequin lined with blue velvet) did not wear a hat, a comment which caused laughter among the attendees. But he promised to remedy it in two weeks' time when, after his commission for Prince Harry and Meghan Markle's wedding, he plans to design one to complete the trophy.