"The six pillars of my career are typography, editorial elements, illustration, motion graphics, textile sector and branding, all of which are connected to each other and feedback". It was with these words that Mikel Pascal began his intervention in our DI55ECCIONS cycle. The multidisciplinary trajectory of this graphic designer of Pamplona origin is reflected in the great variety of projects he has carried out for companies and institutions in different fields such as Nokia, Mango, MACBA or Picasso Museum, among others.

Since 2015, Mikel has been working as an art director for the eyewear brand Etnia Barcelona. "Our objective is to give shape to the concepts we want to project and create images that breathe color, quality and culture", said the guest. One of their most remembered advertising campaigns is #BeAnartist, in which they bet on giving a new air to the classics through the transgressive gaze of world-famous artists (you can read the manifesto of the "anartist" movement here). This new identity brought them closer to the general public, but also generated controversy in some countries such as France, where their reproduction of Delacroix's emblematic painting "Liberty Leading the People" was highly polemical. On this subject, the speaker was clear: "We always try to be faithful to our ideas despite the problems that may arise". 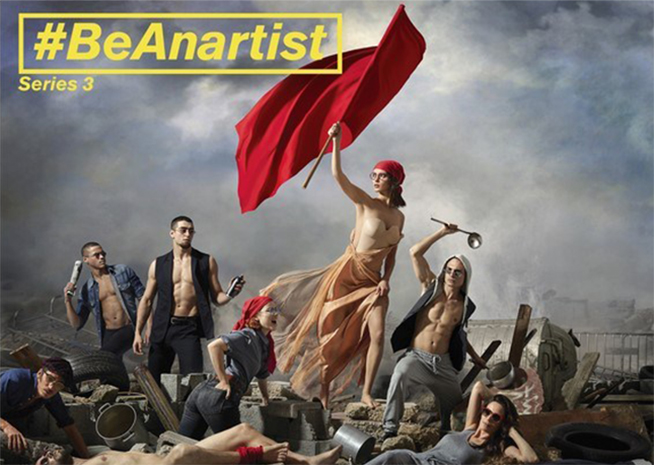 The reinterpretation of pictorial works by great masters such as Da Vinci, Caravaggio, Rafael or Velázquez has become an identity sign of the brand: "It is a resource that is always available. For example, in our last campaign we were inspired by Klimt's "The Kiss" and we decided to contextualize the material with banal elements to achieve a different result". Apart from these works, they also have other types of projects on the table. The firm works daily with creatives from different sectors who, according to Mikel, are given the freedom to elaborate their own contents: "All we ask is that Etnia glasses be the center of the image, the piece of art around which the proposal is articulated".

The guest ended his conference by giving some advice to all the attendees: "It sounds cliché, but I think that we design professionals must enjoy doing our work and never lose interest in research and experimentation". Then, as usual, DI55ECCIONS went to the Ágora to have a drink and share impressions. Thank you for your lecture, Mikel!

The recent graduate has won the AoFF Apprenticeship Award - Maison Lemarié, a four-week internship in the studio of this French brand located in Paris.

The jury highlights "her passion for the profession, her contribution to the empowerment of women and her love for craftsmanship".