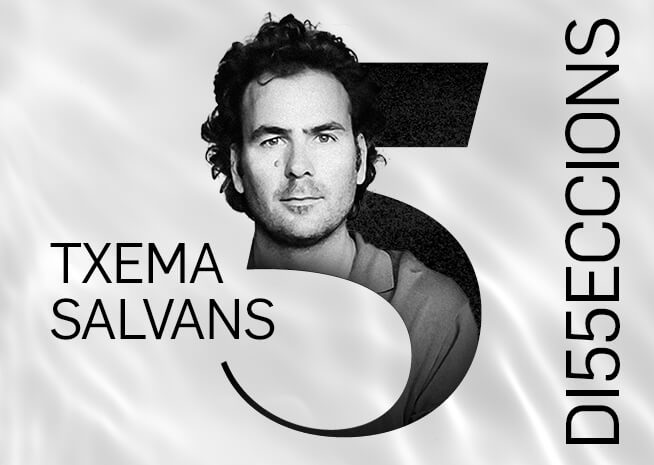 Next Wednesday, January 19th at 19:00h (Barcelona time) we start the 5th season of our conference series DI55ECCIONS, in which we are visited by great experts in design, visual arts, innovation and creativity. After the 100% online format of the last edition, this will be in hybrid mode (face-to-face and via streaming) whenever the situation allows it.


For the first conference of this season, we have the Barcelona photographer Txema Salvans, who develops his work with a documentary and artistic approach outside the usual circuits of photojournalism, also approaching the photographic essay. Joan Fontcuberta describes his work as a "balance between critical thinking and a poetic sense of humor".


A chronicler of contemporary Spain, his projects are consolidated, above all, in book format. Nice To Meet You (ACTAR, 2005) received the Photo España 2005 Award for Best Photobook, while The Waiting Game (RM, 2013) was awarded Best Ibero-American Photobook in 2012.


Txema's work has been published in international media such as Le Monde, The New York Times, Libération, Vice, Marie Claire, Wallpaper, El País Semanal, etc. He has also exhibited at numerous festivals and museums such as Arts Santa Mònica, La Virreina, Museo Reina Sofía and Museum für Photographie Braunschweig, among many others.


*The biographical details of Txema Salvans have been extracted from the Foto Colectania website, specifically from the section dedicated to Perfect Day exhibition.


How to register for the event?


Write an e-mail to comunicacion@lcibarcelona.com and let us know if you would like to enjoy the conference in person or virtually. For the on-site session, seating will be limited to 20 people and the use of an FFP2 mask will be required.


The term "dissection" comes from the Latin dissectio, which means "action and effect of dividing a thing into multiple parts for examination". This is the approach that DI55ECCIONS is based on: exploring different areas of the world of design, visual arts, innovation and creativity with the aim of drawing inspiring conclusions. The graphic identity of the cycle takes the five as the axis around which each edition revolves, either by the number of speakers or the amount of content (projects, influences, trends, etc.) that are presented.


Since its birth in 2016, DI55ECCIONS has featured prominent speakers such as Martí Guixé, Chris Grant, Anna Puigjaner, Carmelo Zappulla, Domestic Data Streamers, Snoop Barcelona and Dominnico, among others, who have told us about their professional careers, their work and their creative processes. The evenings have also contributed to promote dialogue between guests and attendees, thus encouraging the exchange of experiences, ideas and advice and fostering networking.


You can watch the online conferences of the last edition on our YouTube channel.

Photography
Workshops, conferences and webinars
2022
This site uses cookies to offer you the best and most relevant experience. By continuing to use our site, you accept our use of cookies in accordance with our  Privacy policy. I agree
LCI Barcelona
Balmes street, 209
Admission request
Phone: +34 93 237 27 40
Contact us
LCI Barcelona
Balmes street, 209
Phone: +34 93 237 27 40
Admission request
Contact us
About us
Schools
Resources
Future Students
©2022 LCI Education Confidentiality Policy